From the Italian Dolomites I headed to Austria. I don’t even know why, because somehow I really can’t get along with Austria. There is always something I don’t like there. It is expensive, immaculate, boring. I am annoyed by the perfectly mown lawns and by the fact that everything is polished, clean and well-organized. (Somehow I am not so much annoyed by that in Switzerland, so maybe the problem is mine, and there’s nothing wrong with Austria? Maybe I don’t like the Austrian dialects or I am just prejudiced?

But I actually went there (although I could go straight from Italy to Slovenia) only because I didn’t get any response to couchsurfing requests I had sent to hosts on this route. That’s why I sent a message to the 55-year-old Maria from south Tirol, who was very enthusiastic about hosting me. After a very nice afternoon and evening spent in her company (including a visit to a typical Tyrolean festival), I hit the road again the next morning. I choose a road Maria recommended, through Gail valley, which is a part of Dolomites Cycling Marathon’s route.

– It is a really lovely valley, and after the first uphill to the highest point you’ll only be going downhill – encouraged Maria.

Actually, she deceived me. It turned out that the way went pretty much up-and-down during about 50 km and only the second half of the road was bearable. The valley was quite pretty indeed, but the whole day I was fighting against the wind and after 110 kilometers and some unsuccessful attempts to find a free place to stay, I arrived at a campsite, completely exhausted, and I fell asleep like a baby.

I was awaken from my deep sleep by persistent snoring coming from the tent next to mine. I packed my stuff and headed towards the Slovenian border. I knew that there was a cruel ride up to the Wurzen pass waiting for me there. Ride is actually a bad word, it was more of a walk. Maybe there are some superhumans, who can ride a bike with 25 kg of luggage on 20 % gradient. I am not one of them, so I was patiently pushing White Pack Animal, training my upper body, while an about 50-year-old lady in a car tried to pass me on the narrow road. She must have been stressed by the steep uphill, because the engine went out and when she was trying to turn it on again she rolled back. Luckily she avoided hitting the bus that was behind her. Apparently, sitting in that bus was the German national ski jumping team, heading to Planica for a training camp and looking at me like I was a freak. 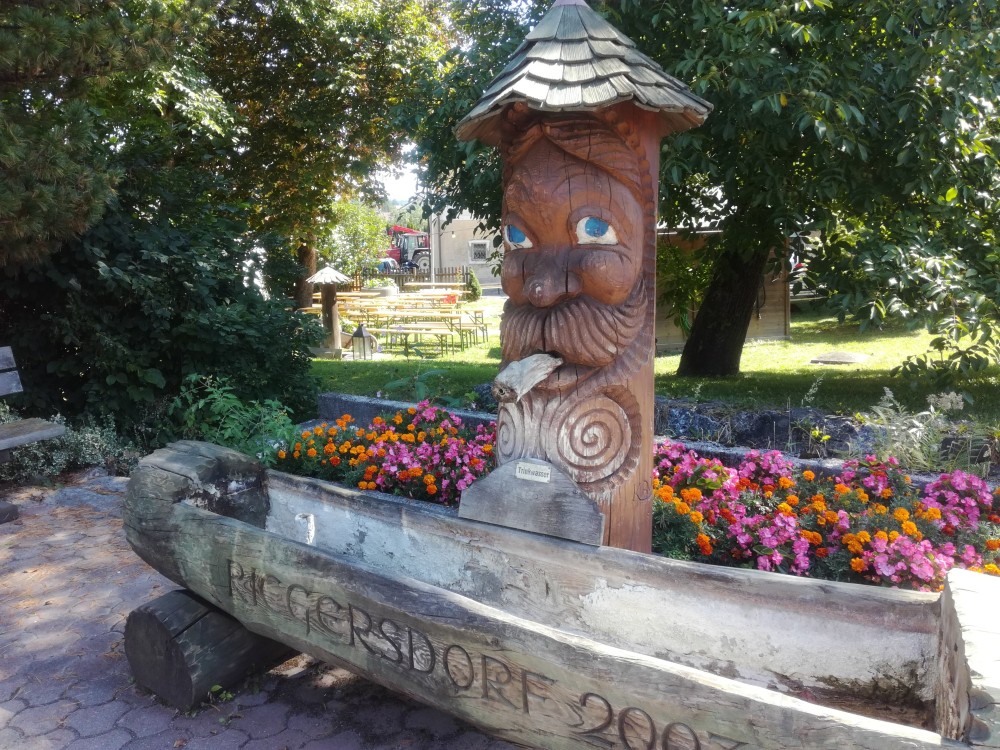 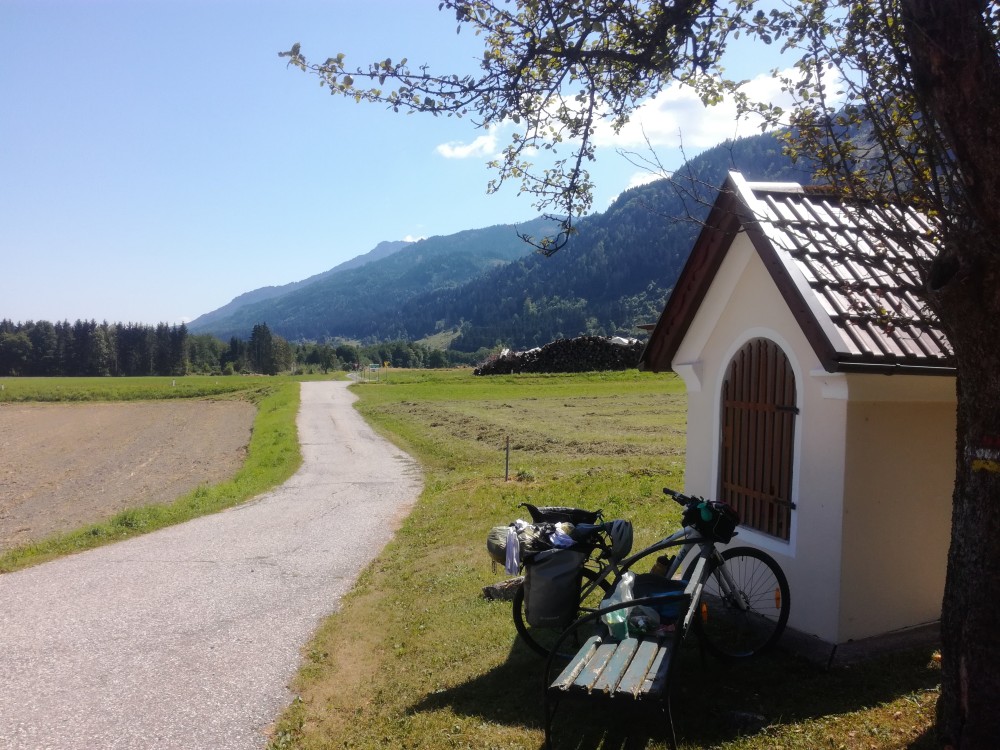 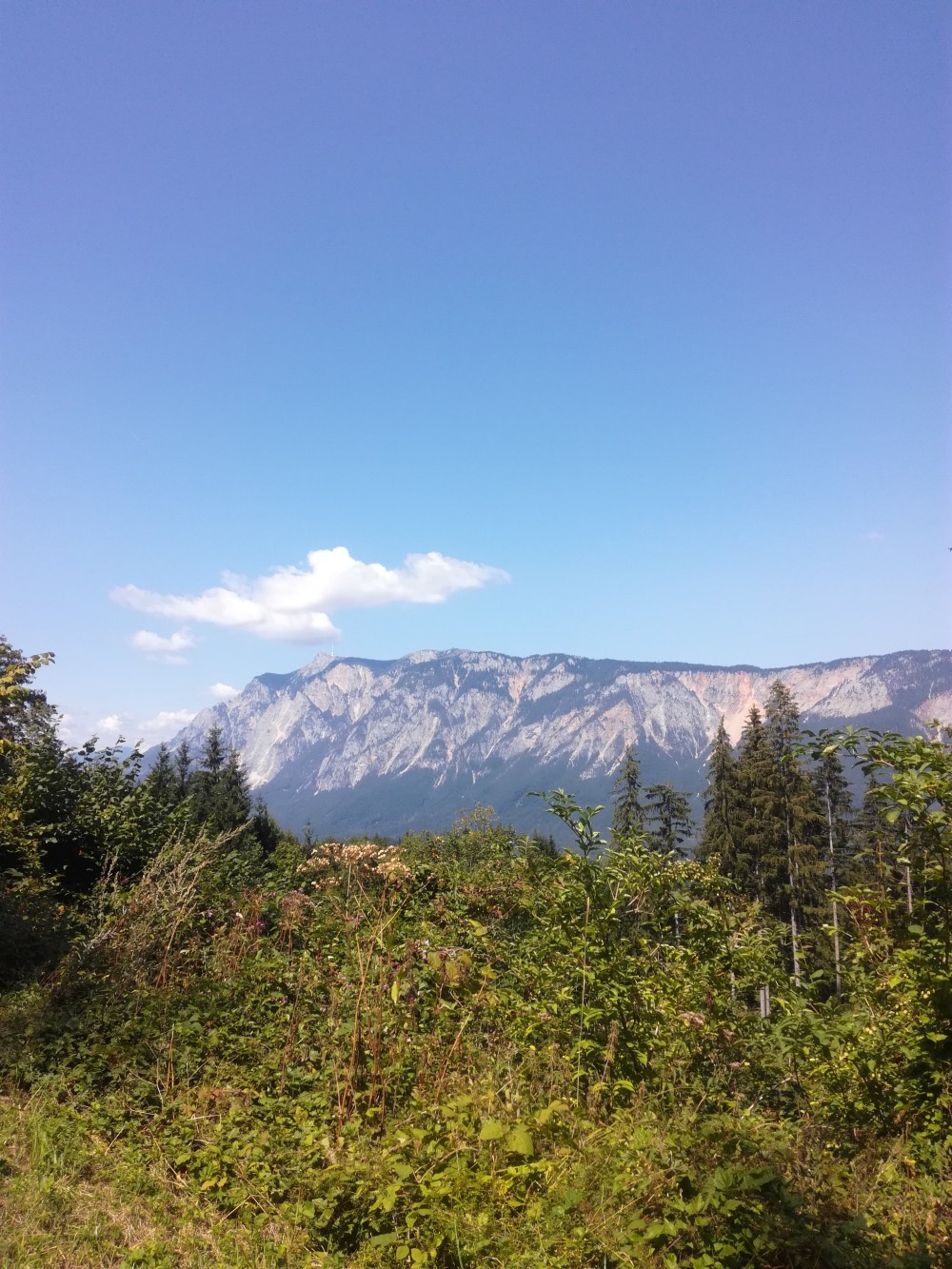 Finally I crawled up to the top and I rode down to Kranjska Gora, a place I’ve known well from before. I took a pleasant bike trail in the shadow of the trees which lead me to Bled. Almost every tourist visiting Slovenia goes there to see the country’s biggest attraction: a turquoise lake with an idyllic church on an island, surrounded by mountains. A view so pretty, that it’s almost kitsch. Instead of spending the day at the lake I, a hipster of tourism, spent my time in Bled making flip flops (ok, I’ve been to the lake too, but only for a short walk). 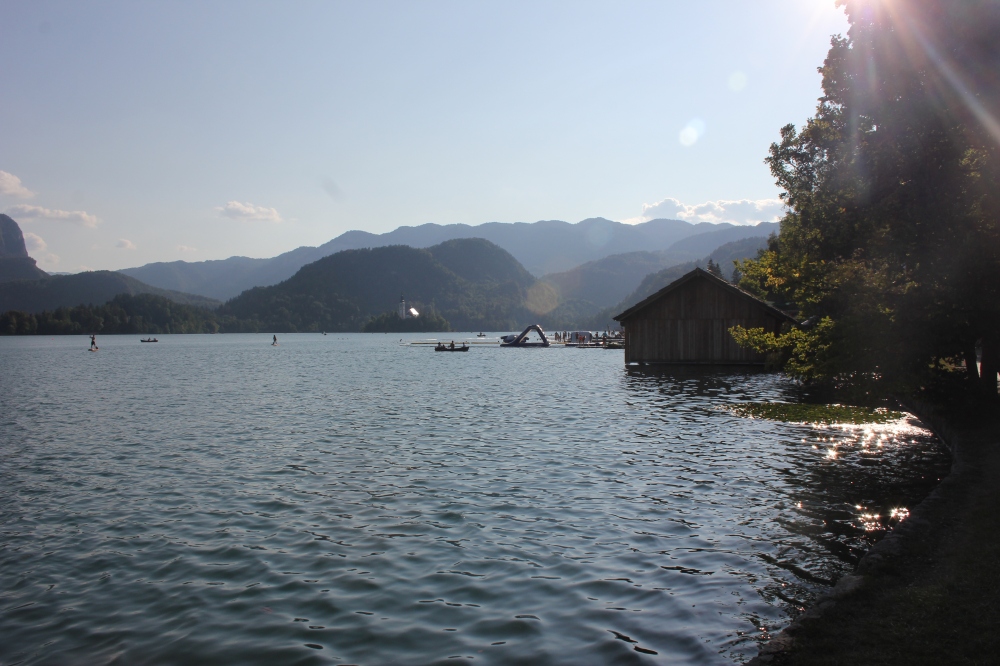 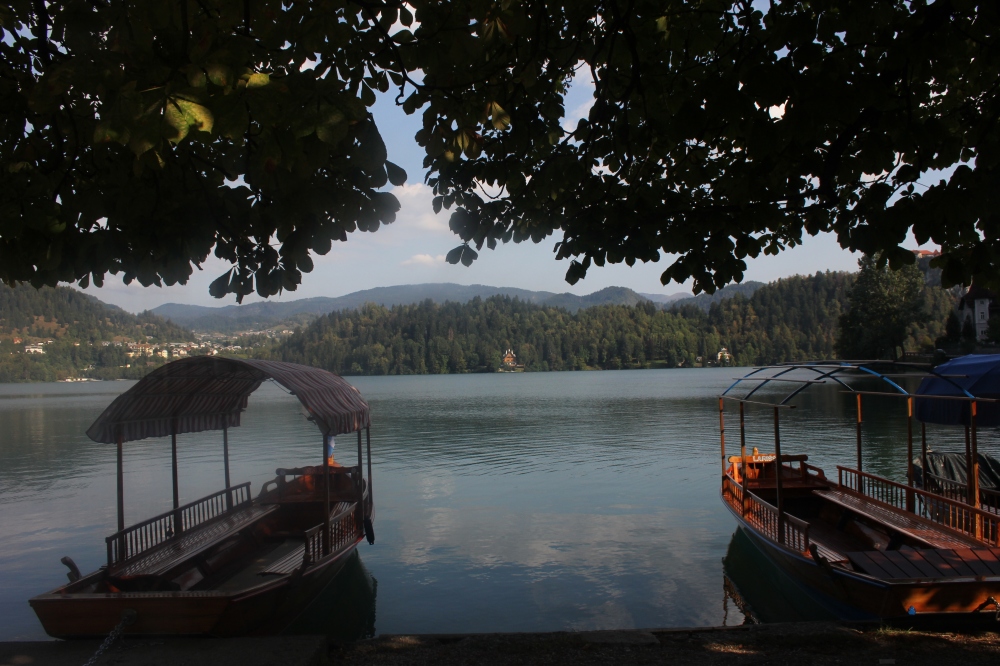 Yes, flip flops. In Bled I was staying with Aljaž–the Steve Jobs of flip flops, and I got the chance to see his little factory and help him a little with his work. 23-years old Aljaž had a very precise vision for his company and was planning that in a few years his unique flip flops with pebbles would conquer the world. (If you would like to order a pair or just take a look, you can do it here, maybe he will conquer the world a little bit sooner thanks to this note).

During my stay in Slovenia I met many inspiring people. For example Aljaž’s friend Andrej – a guy who travels with almost no money in his pocket. Instead of money he takes some hand-made wooden spoons (and some wood to make more) and he sells them to make money for travelling. Andrej not only gave me one of his beautiful spoons (unpolished, but with some sandpaper pieces included, so that I can finish it myself), but also offered me a stay in a barn in his parents’ backyard, with a splendid view on a little church and the valley (this spot has made it to my TOP 10 accommodations during this journey).

Morning view from the barn – not bad, is it?

I spent the following days on a campsite in Triglav National Park, together with my parents and my sister, who came here for holidays and also brought me some supplies and took from me some stuff I didn’t need, so that I didn’t have to carry it anymore. We had the chance to hike together (unfortunately it turned out that many of the Slovenian trails are not really suitable for people with such a fear of heights as mine. E.g. on the way to Triglav I got a panic attack, made a terrible scene and gave up, before it actually started to get really serious). We could also enjoy the crystal clear water in Soca river (if you like refreshing baths  in ice cold water, you definitely should visit Velike Korito). 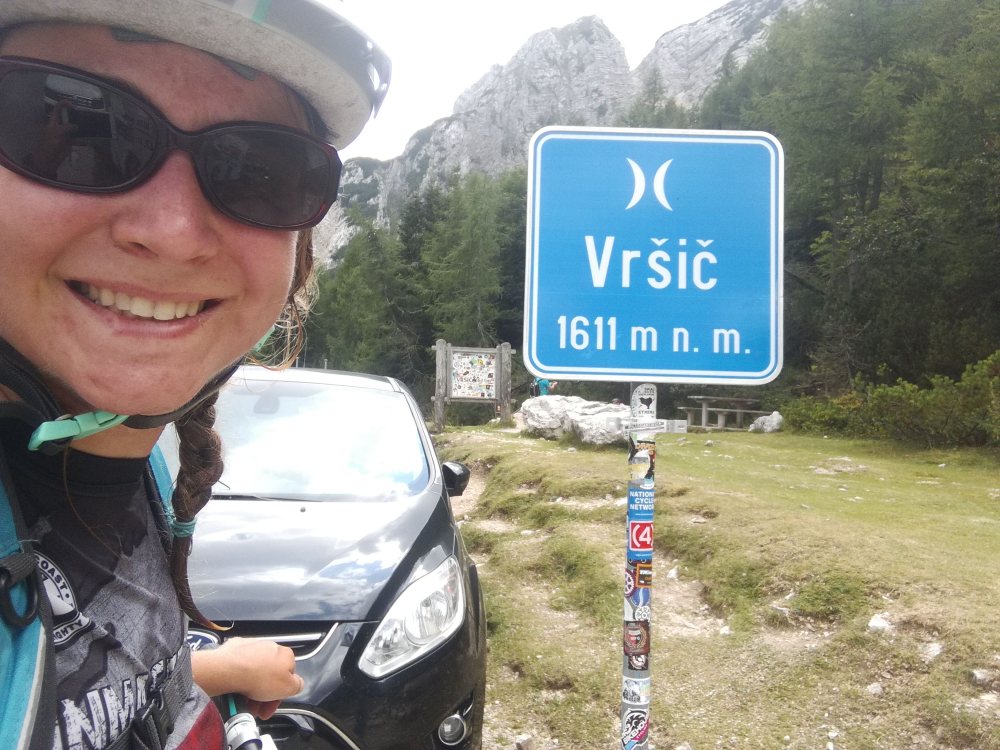 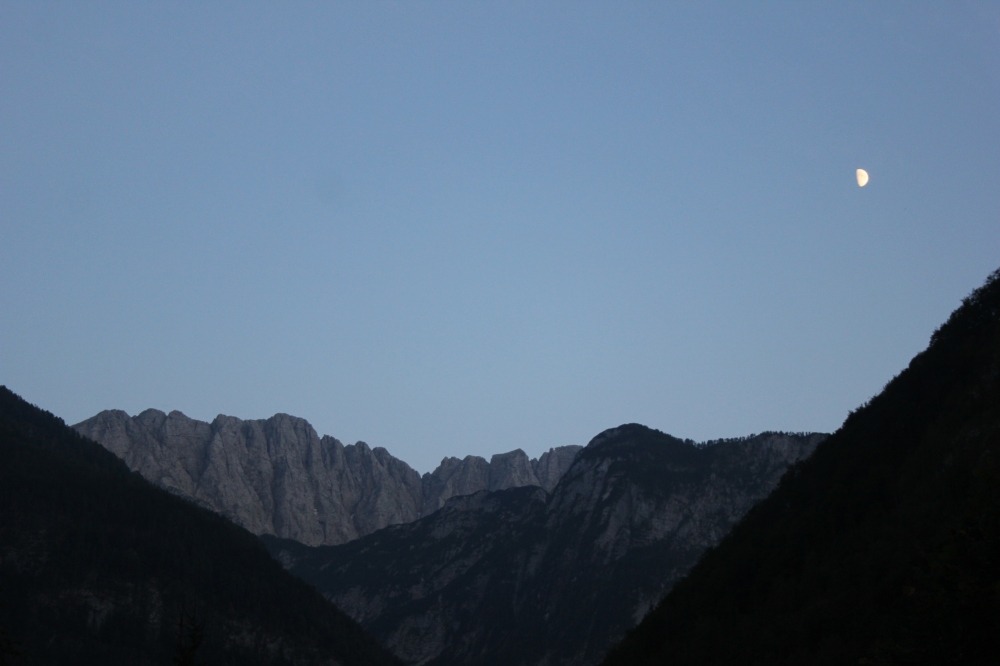 On Friday, when my parents went back north, I continued cycling south, looking forward to many kilometers along the Soca Valley. It’s going to be downhill, I will enjoy the views – I thought. According to the weather forecast it was going to rain a lot on Saturday and Sunday. But the weather had different plans and changed earlier, already on Friday morning.

I had just covered a few kilometers when a terrible thunderstorm began and a huge rain started to pour. I hid under a roof on a terrace of a restaurant, waiting for the storm to pass. Minutes, an hour, two hours – nothing changed. Obviously the weather decided to make it up for the whole dry summer. – Well, I definitely won’t be sitting here until Monday – I decided finally, when the thunders became a little more distant. I put my plastic raincoat on and floated on. I dried a little bit and stayed for the night in Kobarid and continued the next morning to get to Idrija (actually to a village close to Idrija (actually to a house three kilometers away from the village)), when I was supposed to couchsurf again. 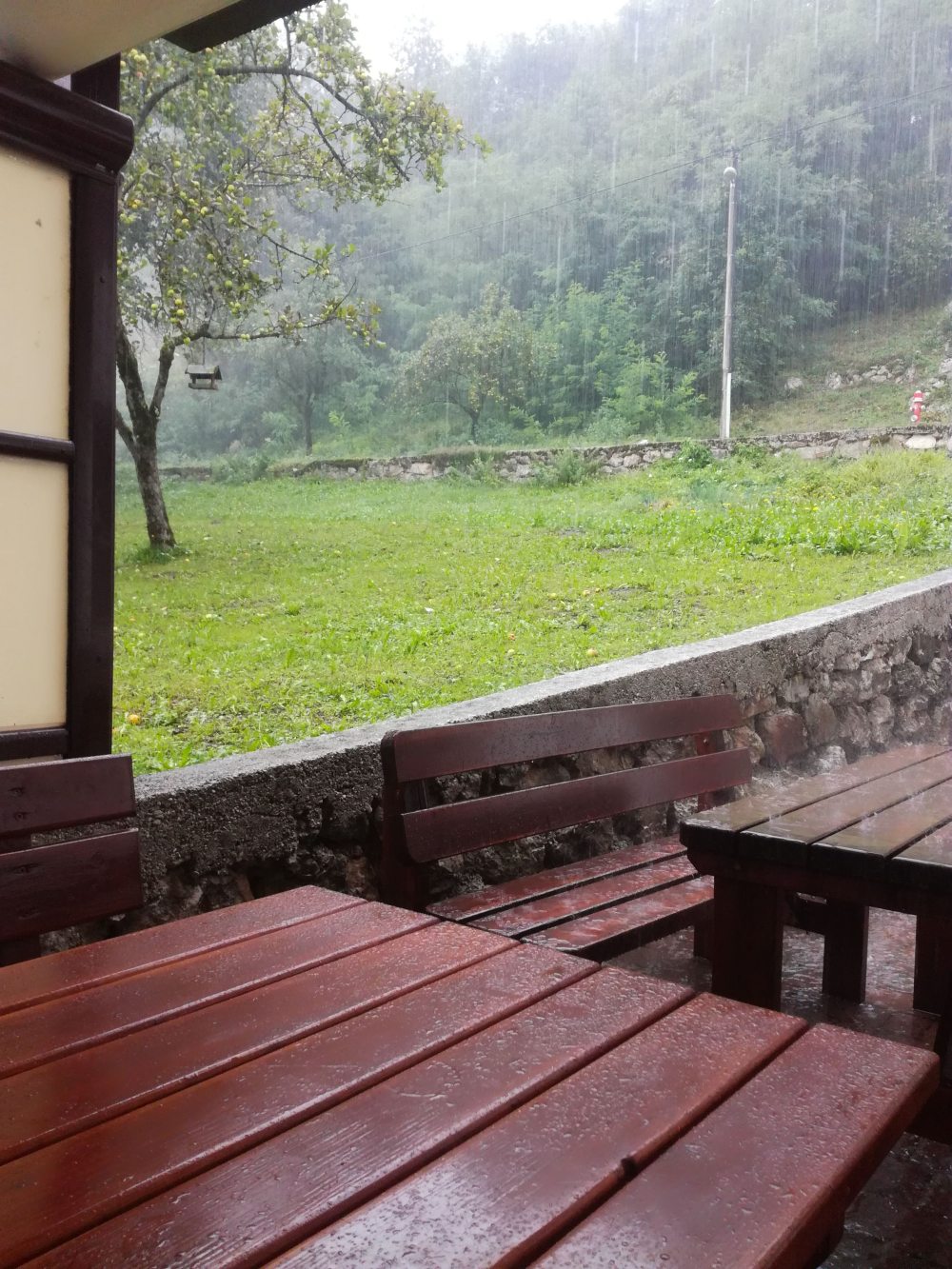 Jerca hosted me in the house of her parents who were on holidays. When I saw plenty of photos on the walls, a pleasant chaos all around and Jerca’s siblings bustling in the kitchen, I instantly felt like home. We watched a comedy in the evening and for breakfast Jerca made delicious pancakes. Then she took me to a place where you can see the only dinosaur footprints in Slovenia (to be honest, they were not that impressive, but at least I can cross off ” see dinosaur footprints” from my bucket list. And on Sunday we went on a road trip to Bovec, just to go for a walk, eat pizza and pick up Jerca’s brother who was working there. Just a stress-free weekend – almost as if I had taken a break and gone home for a weekend before going to the Balkans, where the most exciting part of my journey was about to begin. 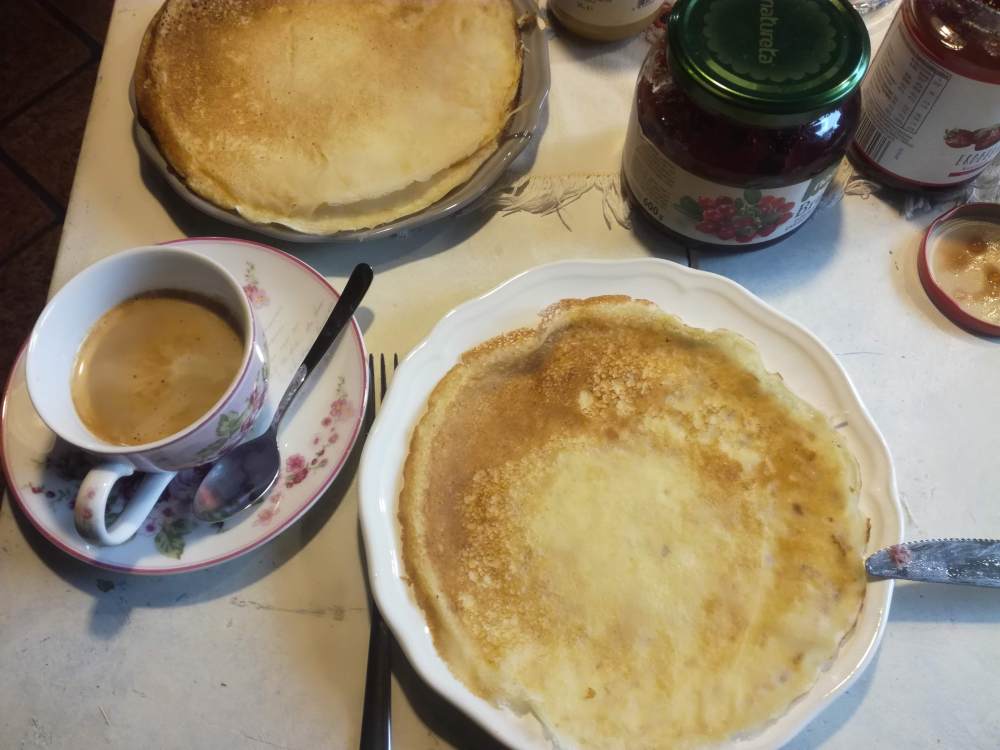